Ever heard the phrase “Just because you’re paranoid doesn’t mean they’re not out to get you?” Paranoia is another fun little text adventure from the wordy minds of Choice of Games that puts you in the shoes of a deeply neurotic conspiracy theorist who may or may not actually be right.

Paranoia is free, so if you’re interested in checking out one of these newfangled interactive fictions, but aren’t sure if you’ll like ’em, Paranoia will give you a taste without breaking the bank. It’s on the light and short side, but there’s plenty of tinfoil hat-wearing goodness for everybody.

Paranoia works a lot like a Choose-Your-Own-Adventure, where you’re effectively reading along with a story, but at various intervals, you’re called upon to select a path. Sometimes it’s as simple as deciding if you’re going to take your crazy pills that day or not, and other times it’s a little more complicated, like deciding to stakeout your doctor’s office. The choices you make all have an affect on what comes next, and they also affect your overall stats, which you can keep an eye on as you progress through the narrative. 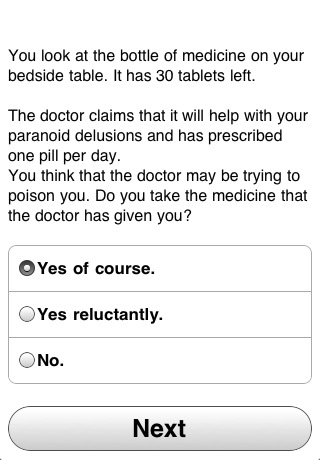 Eventually you reach an ending, which is either good or bad. Some of the bad endings, for example, may include being consumed by your own paranoia and hauled off to an insane asylum. Like any good text adventure, there’s plenty of danger lurking behind every corner, and you’re likely to uncover more bad endings than good ones. The good endings are definitely possible, but it does take a fair amount of experimentation before you get there.

One of the major advantages of the relatively brief nature of Paranoia is that it’s easy to run through multiple times, so you can try to get all the different endings. The day to day action tends to be on the heavily repetitive side, since this is much more stat dependent than story-driven, unlike some of the more robust titles, like Choice of Romance or Choice of the Vampire, but it’s much easier to get a sense of the overall flow of Paranoia because of this.

In general, the game doesn’t really have as strongly fleshed-out a narrative as you might hope, but playing the role of a twitchy loon is still entertaining on a basic level. The prose tends to be a lot lighter and more humorous than in many of the other Choice of Games offerings, which may make it a tad more approachable for people put off by the occasional wall of text in Choice of the Vampire or the like.

Paranoia is a low-calorie snack compared to many of Choice of Games’ other rich and meaty titles, but the price is right, so it’s worth a peek if you’re into a little wordy fun.