Zelda is not a side-scroller, but if it was, it would probably be something like Illusia. A side-scrolling action RPG stuffed to the gills with sword and sorcery shenanigans, Illusia is the latest offering from South Korean mobile RPG powerhouse, Gamevil. These are the same folks who brought you the Zenonia series, and it’s clear that they know something about delivering old-school RPG action.

Although it’s a port of an older mobile game and suffers from clunky menus and a few translation issues, Illusia is still a satisfying and deep experience. The environments are large, detailed, and populated by a rich variety of monsters to vanquish and cute characters to interact with, and while the story is rather bland, the dialogue is delivered with enough charm and humor to keep things engaging. 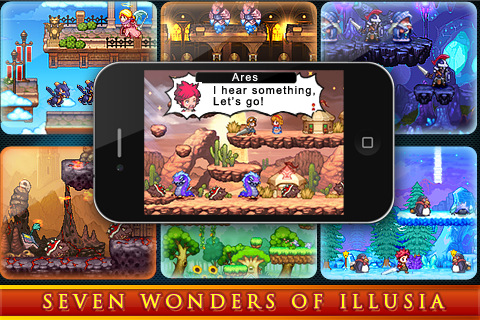 You start off choosing between playing as a weapons-based warrior or magic-based mage. Naturally, their different strengths affect combat style, but there is also an enormous amount of customization and special attacks to learn that will help you develop your own particular style.

You start off taking your adventurer’s graduation exam, and you’re set killing monsters, collecting loot, but soon enough, bad stuff happens and you stumble upon a mysterious force that is putting the evil mind control whammy on formerly peaceful creatures, and naturally it’s up to you to save the day.

Quests are a major part of the game, and there are a number you can go on, but almost all of them fall into the familiar pattern of kill X number of monsters or collect X number of items. This requires negotiating some beautifully detailed, but also very complicated environments. Most of them time you’re left jumping and fighting your way through monster-filled labyrinths to get to hidden portals and passageways to the next screen, and unfortunately the world map is a bad joke in terms of how useful it is for navigation, and the action gets pretty repetitive after awhile. There are bosses at the end of each area, but most of the time it’s an extended grind-fest. 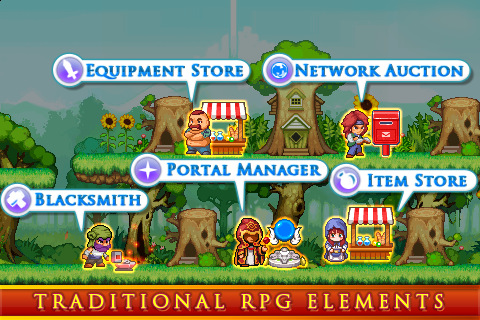 Thankfully, there are other extras to keep your head in the game, like taking advantage of the online options, like the auction house to sell items. You can also take a risk at the blacksmith to try to refine your gear. There’s a metric ton of interesting gear to collect, which both affect your stats and change the look of your character. There are also special rush mode challenges which you can blitz through instead of digging into the normal game progression.

In general, I was pretty impressed by the design choices, the amount of content, and the balance and feel of the game, but Illusia is still less than perfect. The very clunky menus leave a lot to be desired and the touch controls in general are really only so-so. Other minor errors, like the frosty crustacean “Ice Craps” serve as a reminder that this wasn’t initially designed for an English-speaking world, but overall, Gamevil’s done a very respectable job of bringing this to the Western market.

The graphics don’t compare to, say, Chaos Rings, since Illusia definitely looks and feels like an older game, but this is still a very quality game with a whole lot to offer. At $5.99, it might seem like a high price, but considering that you’re getting a full and meaty old-school RPG, with hours and hours of entertainment, I’d say it’s a steal.