CP3K is a breathtaking new basketball themed run and jump game for the iPhone and iPad from Nike featuring NBA player Chris Paul. Using s series of speed boosts and hyper jumps you chase your own ghost over random stacked layers of platforms in this fast paced runner in 9 levels of increasing difficulty.

As the levels start, Chris starts running down the platform. Tap anywhere to have him jump, and hold down to jump a little bit higher. There are some obstacles that you have to jump over, requiring perfect reflexes and timing. A quick note: I noticed that you need to max out the brightness on your device in order to fully see the black obstacles in the game. If you run into them, they break and you move on, but you lose a ton of seed, which isn’t good. 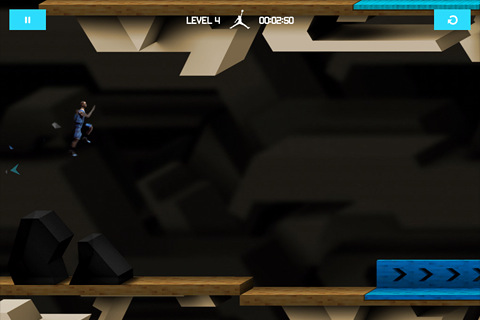 Tap on screen as Chris Paul runs over various colored sections on the runway. The dark blue section is “speed burst”, just tap and you’ll go super fast for a few seconds. The light blue area is a “jump boost”, just tap an you’ll jump higher. While you’re on the red platform area, tap and watch CP3 fly up and forward and dunks over the rim which is like 500 feet up in the air. Air Jordan eat your heart out. Oh and for added fun, he also breaks the glass backboard shattering it all over the place. Finally there’s the wood colored platforms that launch you either forward or backward. As you run you have to keep up with and beat the ghost running on the platform, which is either your own best time or the player you are challenging. 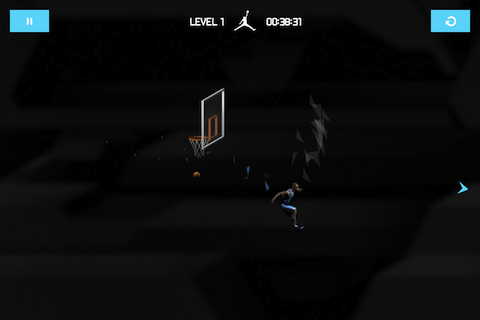 Gameplay is very fast paced and gets exciting as you build up speed. You can play against the iPhone or challenge other players on the network. You can challenge opponents from the global ranking list or find your friends on Facebook and run agains them. New levels open as you beat your time. There isn’t much other than timed tapping, and though it might sound simple, its really exciting. CP3K has original background music and sound effects. The fact the the graphics are extremely sharp and futuristic doesn’t hurt either.

Overall, don’t miss out on this free game, sure to be an instant hit in the App Store. Works on both iPad and iPhone too. My only request would be for additional levels.