Sperman is a gaming app that sets you up as an egg that is trying to dodge an army of sperm. It was developed by SideMaster Inc. for an iPhone, iPod Touch, and iPad and it costs $0.99. There is also a lite version of the game that you can try out for free.

I do not know whether to be offended by Sperman or find it absolutely hilarious. Usually when I have trouble deciding if something is offensive, it is not worth thinking about. So let’s decide to find this game ridiculous and hysterical. When you start playing there is a comic strip style story displayed for you that puts you in the mindset of a girl, out at a party, who is just trying to have a good time and find a nice boy. 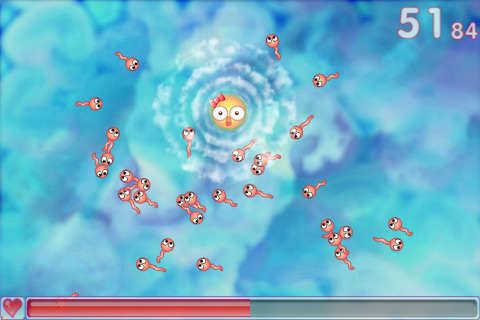 Things heat up and they start dancing. One thing leads to another and the girl ends up on her back and thinking, “My mom gonna kill me if I have a baby.” You tap the Next button and the game begins: An egg with a face on it and a bow on its head, set against a tie-dyed blue background. You tilt the screen forward, sideways, and backward to control the egg’s movement. Soon, sperm start swimming toward your egg and off it goes trying to avoid them like the plague. Eventually, spinning pills enter the screen, which symbolize birth control pills, and you have to move towards them to gain more on your lifeline. The lifeline is located at the bottom of the screen and helps you keep track of how your egg is doing. Ultimately, the sperm start swarming and it becomes much harder to dodge them. If the sperm attaches to your egg, you start losing strength, but you can shake your device to get them off. 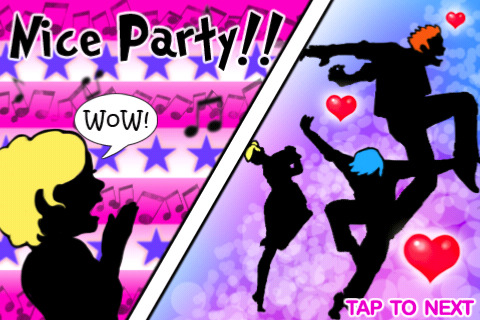 Sperman is definitely original. It is really simplistic and gets boring after awhile but it is amusing and the concept is priceless. It is one of those games that you should keep on your device for times when your friends ask to play your app games; hand over Sperman just to see their reaction.