Dragon of the Three Kingdoms review

It’s the rage of war! Take up arms and march off to do battle!! You are Zhao Yun and you, your sword, and your super mystical magical powers are the only things in the way of elephant riding barbarians! Released by WaGame Technogy, Dragon of the Three Kingdoms is available on the iPhone, iPod touch, and iPad for $0.99 until January 31st, in which it will return to its original cost of $2.99.

Dragon of the Three Kingdoms is an Action RPG beat-em-up game in the same style as Final Fight or Streets of Rage. User interface is clear and easy enough to understand. Health bar, a ‘rage’ bar that fills up as you deal or take damage and at max, you gain a new action button that activates a super strong combo attack, and you have the standard d-pad that is surprisingly responsive and easy to use. You collect flags to activate special attacks, and you even get a lovely score count to keep track of your progress. 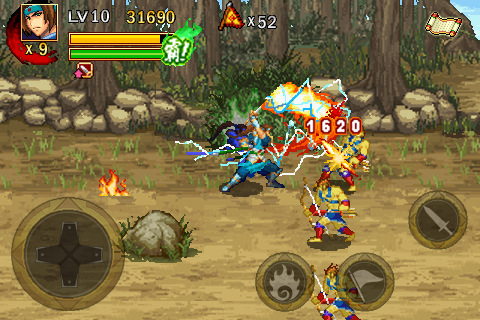 I have a lot of issues against Dragon of the Three Kingdoms and I can’t help but feel that this was wasted potential. Graphically, this is a mixed bag. Horribly pixelated, blurry, character sprites, with the WORST rain effect I have ever seen are mixed next to genuinely nice character portraits during the speaking cutscenes. Maps and some background objects look good despite being so fuzzy and visually, I can see the SNES/Genesis inspiration in the pixel art.

The character dialog is handled so badly too. Besides the clunky, awkward, and sometimes sexist dialog (“Darling you are right. Though I’m a woman, I’m willing to serve as troop leader for this battle”) every dialog scene ends with a blank page that serves no purpose. It’s literally like the game froze, but it turns out all you have to do is tap the screen one more time. It’s a clunky interface design that happens at the end of EVERY scene. Characters who begin speaking all have a word bubble appear with “…” constantly dotting inside of them. I don’t know about you, but I read “…” as silence, not when people are talking and having awkward conversations. Characters are unlikable because of how expositional some dialog is, and how whiney the main character is.

Combat feels boring and stale. Hold the attack button to auto attack. If you hit an enemy, you will go through a combo chain on that enemy. Sometimes they will be stunned after each hit, but I found 90% of the time, they will attack me through my combo. You might actually end up getting hit a minimum of 3 times PER enemy. The elephant is the most annoying one since its single attack is ridiculously powerful and it takes dozens of close range attacks to cause it to run off. You have no defensive abilities like blocking or rolling out of the way to add strategies or damage mitigation, so most of the game is hold down attack button, release and walk forward, hold down the attack button. All this while your health declines from cheap, unavoidable hits. 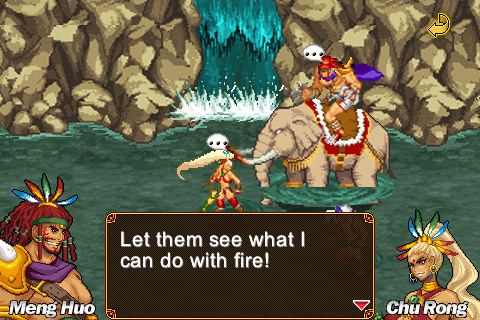 The background music is a short musical loop that repeats during an entire level. This wouldn’t be so bad if it weren’t for the fact that pacing in Dragon of the Three Kingdoms is slow like crazy. Dozens of screens with 2-3 different enemy types repeated throughout and you don’t get any new weapons or items until you go through at least 5 sections first. It’s slow, and progression is ridiculously tedious. When I completed the first stage, I couldn’t even afford the most basic armor upgrade and the weapons cost a ridiculous amount compared to how slowly you collect money in this game.

Another issue is that the touch screen controls come up only when the d-pad and action button aren’t on screen. Map screen calls for touch screen tapping but the in game pause menu requires the use of the d-pad. Why? Why can’t all the menus just be touch accessible? It’s a minor gripe, but it does add to the frustration and irritation.

Slow pacing, repetitive action, repetitive sounds, flawed dialog system, flawed combat engine, and mixed graphical quality. Loved the character portraits and some of the special attacks look pretty cool. The environments can be quite nice, though repetitive too. I really hate to be negative in these reviews but Dragon of the Three Kingdoms needs an overhaul. The price at $0.99 isn’t worth it in its current state and the idea that they are pushing the price ‘back up’ to $2.99 for this game is offensive. I refuse to lower my expectations just for this review, but I will say that it is salvageable and with some major tuning of the entire app, it can be a good game. Until their next giant update though, I give this app a below average. Best of luck WaGame Tech. Best of luck.

This 3rd Party App is available at the Apple iTunes AppStore. Browse the full list of all AppStore apps filed under the AppStore category.
Download Dragon of the Three Kingdoms at iTunes App Store
Price: $0.99
Developer: Website
AppSafari review of Dragon of the Three Kingdoms was written by Joseph Ho on January 27th, 2011 and categorized under Action, App Store, Beat-em Up, Games, RPG. Page viewed 4550 times, 1 so far today. Need help on using these apps? Please read the Help Page.