I hate bugs. Bugs are gross. They ruin picnics, they act all cute in Pixar films, and they crawl on our faces and enter our mouths and ears when we sleep (good luck sleeping tonight). So an app about committing extreme violence as a bug against bugs is like an odd form of therapy. Shoot bugs, defend your food storage, and survive. Released by Foursaken Media, Bug Heroes is available on the iPhone, iPod touch, and iPod for $1.99. This app has Game Center support.

Play as a gatling gun wielding ant, a club swinging beetle, or a double sword armed spider. You can switch between any of them at any time by tapping your character, each has unique upgrades that relate to their classes, and they all have their own uses. As you kill enemies, you gain new points to further upgrade your characters, even the ones you aren’t using. 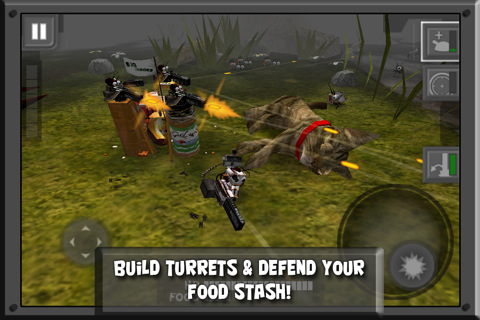 Each class has their major strengths against certain enemy types, and they each have their own play styles. With the Ant, you upgrade guns, set traps and bases, and create turrets to aid in long range fire and run away style fighting. The beetle is a tank that can take on entire groups and push them around. You can upgrade his club into a wrench, his HP can regenerate, and his defenses can grow stronger. Finally, the spider has upgrades to allow him to wield four swords, hit with incredible power thanks to critical hit bonuses, and has the fastest movement speed. 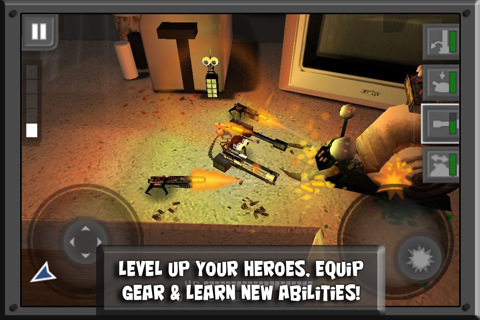 The game is essentially a tower defense game where you have a pile of food you must defend in order to survive. Some enemy units attack the base exclusively while others will only attempt to kill you and will ignore the food base. The base itself can be equipped with automated defenses like machine turrets that can help you take down some tougher enemies. As you go along, you can collect food from other areas of the level since base-attacking enemies only spawn once in a while. Random quests will pop up with some requiring that you explore the level a bit to collect coins.

Environments are extremely well done with a blend of realistic yet cartoony. There are different, relatively large levels from playgrounds to office desks and they really give you great places to explore. Each character model looks pretty good, though the spider has a pretty dark, messy appearance thanks to its shape. There are over 25 enemy types that have different appearances and a very lovely Insectopedia that allows to you get close ups of all the enemies that you encounter. Very nice 3D and very well done interface. 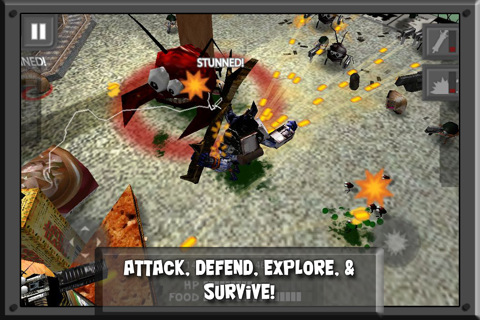 You can play Bug Heroes in Adventure mode, which includes a story and the ability to switch to different characters, and Coliseum mode, which allows you to jump right into the action with only one character class and survive as long as possible against swarms of enemies. I found adventure mode to be far better because of the way the pacing is set. Coliseum tends to bring out enemies that your chosen character really stands no chance against. Your ant character’s bullets barely put any damage on armored enemies and they spawn all the time in Coliseum mode.

I really enjoyed Bug Heroes. It’s addictive, has tons of content, levelable characters with lots of variety and upgrades, lots of different enemy types, and it is one of the best tower-defense/scrolling shooters I’ve played on the iPhone. If Foursaken added in more gameplay expansions like stage advancements, some type of escorting stage while you move your base to a different part of the house, big bosses like humans who all the bugs fight against or something, and maybe a bit more difficulty tweaking, this could definitely compete against some of the console games I’ve been playing. I’m utterly addicted and for good reason.