Released by Sigma Game Limited, Defender of Diosa is available on the iPhone, iPod touch, and iPad for $0.99 and has a Lite version. Defender of Diosa is a fantasy themed defense game where you are on a 2D plane. There is a queen you must protect by summoning soldiers of different abilities. Use special powers, unique job class abilities, and magical enchantments to keep everyone alive! Defeat the goblins and save the queen!

The Queen has been turned into a chicken! Who would’ve thought? So the game plays like this: You control a small army that must stand as guards against the army of invading monsters. You have access to 7 different guard classes and 2 magical God-like abilities. To manage your limited soldiers, you must drag them to bed to rest and recover health then drag them back into the battle, or drag them over to the enhancement room to unlock their special effects. You can drag them around the screen or tap them to make them turn around. All in all it’s a fast, frantic, and intense battle system. 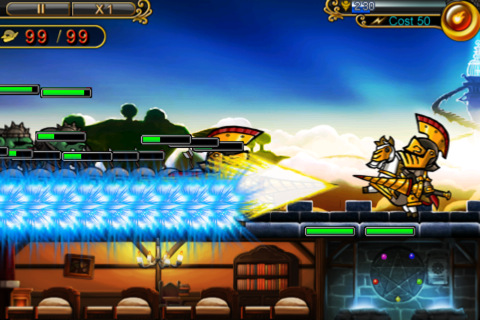 Defender of Diosa is an excellently well designed game app. The art is great. Excellently drawn and colored rooms, backgrounds, characters, enemies, and attacks. I especially like the chicken who sits on her throne watching the battle. User interface hits the mark perfectly with all the meters, numbers, and health bars reading clear. I was never confused by any of the menus.

When you tap and hold on a character, you’ll bring up the class system list. You have the Soldier (average melee attacker), the Citizen (increases your magic so you can cast those God-powers), the Archer (long-range attacker), the Axe Warrior (who knocks enemies back with each attack), the Knight (which dashes right through groups of enemies in one sweep attack), the Assassin (insanely powerful melee attacker with weak health), and the Magician (who casts arched fireballs that deal area damage). Each is fairly useful, though a fully leveled Knight can utterly destroy anything that comes close to the princess. If you have 4 of them, while one is waiting to attack again, another can take its place. This effectively eliminates most enemies in the game with exception for the bosses, who react better to archer attacks and God-magic. Each character class also has tons of upgrades and levels to increase and each room has their own leveling up system.

The game does include In-App purchases. You have access to gold (10k for $1, 30k for $2, and 100k for $5), more quests (another $1), and the two separate speed options (x2 speed up or x4 speed up for a dollar -each-). I usually don’t like to buy extra things inside of an app, but man, they really pushed it with the speed up options. In a defense game like this, levels can last for quite a while with up to 100 enemies waiting to come attack you. Speeding up can help skip through levels that you have a clear advantage in. Making players pay a price equal to the game’s current price is, in my opinion, annoying. This option should be already unlocked or at least unlockable in-game. I know developers need money, but this is just insulting. 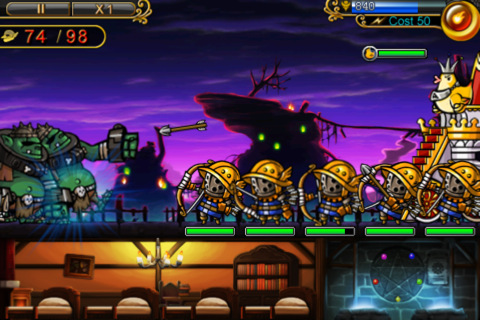 Other than a single flaw, an optional one at that, Defender of Diosa is one of my favorites. It looks great, plays very well, and has great potential for more games. I want to see more classes of characters, more enemy types of different challenges, and maybe customizable skins for them too. Wouldn’t it be great to change the colors of their armor or maybe change the appearance of the queen and her throne?

Get this app and ignore of the In-App stuff unless you really want the extra gold for faster leveling. Defender of Diosa is just plain fun.