X-Men by Konami Digital Entertainment for iPhone, iPod Touch, and iPad is a $0.99 action arcade game. I remember playing this game and other Konami beat’em ups after school when I was eight to fourteen. Sometimes a fellow gamer would join me and we tried to beat every stage without dying and rushing to get more quarters due to the ten second continue counter was something memorable to me. I liked to play as Wolverine or Colossus and I still do. This app looks the same as its arcade version but has a number of changes.

Select the Help and Settings part of the Main Menu then How To Play to find most of the info you need to play the game. The controls are tap the corresponding buttons to attack, jump, or use a mutant power and move with the direction pad. I like the ability to move the buttons around so it might be helpful to someone that is left-handed or just wants to change the layout to fit his/her needs. There is only local multiplayer and I haven’t played the multiplayer so I don’t know if it’s good or not and if it has any problems. You can change the difficulty levels and there is a stage select. This game has Game Center, Open Feint, and Facebook support for high scores and achievements. There are awards for doing certain things such as getting to a certain point in the game and completing a stage without jumping and they can be viewed without being logged on. The only award that I don’t think I can accomplish is to play a game with three other people (don’t know if you have to beat the game to get it). 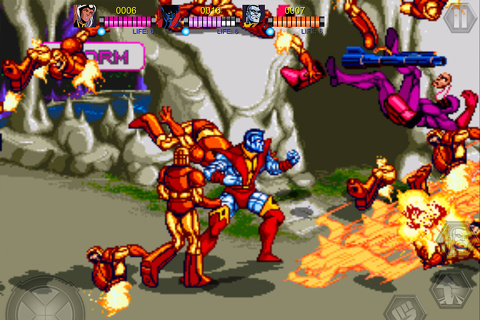 Graphics are the same as I remembered. The characters, backgrounds, and mutant powers are intact with a graphical overhaul. A problem I have is the screen does not show everything so you might get attacked from the edges so try to stay in the middle of the screen. The funny yet strong enemy unit that looks very similar to Metroid’s Samus Aran is still in the game. There are a lot of palette swaps. This is not a big deal but in the How to Play section, it does not stay on the dot of the current page you’re on. This version looks great to me even with the bugs.

The audio is reminiscent of its past from the sound effect of a mutant power activating to the bosses taunting you while they are being attacked. When selecting a character on the selection screen you can hear the name of the character being called out. Lines like “I am Magneto, Master of Magnet” are still in this version of the game. The music is different for each stage and I still like hearing the sound effect when an enemy takes a hit or two. Audio is as I remembered and I don’t know if it needs any improvements. 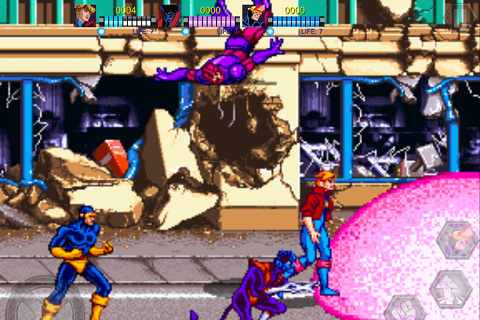 X-Men costs $0.99 on the iTunes App Store. There are no in-app purchases. This game crashes once in a rare while on my 4th gen. iPod Touch 32 GB. This game is easier because of the free continues unless you care about your score. I don’t think the free continues should be debatable since it could have gone down a bad road like being asked to pay a quarter to continue when you run out of lives. Also, a player can make a rule where when you die you have to restart that level or that game. Despite a few problems here and there I think this game is enjoyable and it reminds me of my youth. I would like to play other beat’em ups from Konami such as The Simpsons and any of the Teenage Mutant Ninja Turtles games.