3DBoard is a Glasses Free 3D effect for SpringBoard for jailbroken iPhones. Check out the demo video below to see it in action. You basically move the iPhone around and it lets you see around the icons using some sort of 3D holographic trickery. Developer Apocolipse uses the iPhone 4’s gyroscope and motion sensors to slide your background wallpaper graphic around which gives you the illusion of viewing in three dimentions. No 3D glasses required, and you’ll be able to buy and download it via Cydia for $2.99 right now. To get this awesome app you’ll need 4.0+ iOS. Early reports are saying that there is a slight amount of extra battery usage caused by the app, but not much. Now this is the kind of “different” thinking that makes you want to jailbreak you iPhone. 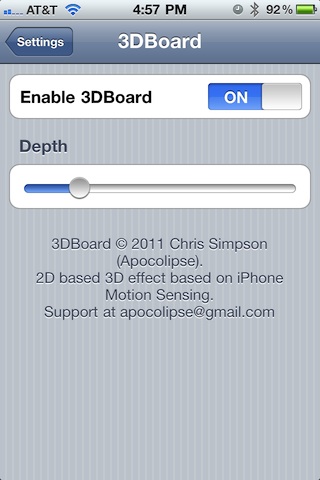 The app has its own section in the Settings app which lets you change the depth of the wallpaper 3D effect using a slider. You can also disable the 3DBoard functionality from here. Since 3DBoard uses the wallpaper background image to create the illusion of 3D, it will only work on background images that have some sort of texture to them. It will not work on flat colored backgrounds, or really dark colors.

Use iPhone mods and hacks at your own risk! Installing 3rd Party iPhone apps requires you to jailbreak the iPhone before installing the native software and apps. Browse the full list of all iPhone and iPod touch jailbreak apps filed under the software category.