“A Shepherd’s Pie of functionality, huh?” That’s what Creepmode’s utility app, Pocket’s Pie, is advertised as on iTunes. When I first read the description, I didn’t see the connection between Shepherd’s pie and cameras. What the heck were the developer’s thinking? To me, Shepherd’s pie conjures up images of a savory ground beef and a pea/carrot/onion mixture topped with whipped, cheddar mashed potatoes. So sure, you could certainly take pictures of Shepherd’s pies (and if you do, I’d love to see them) but there isn’t much of a connection between cameras and pies otherwise.

And that is when I dug out my detective skills and researched the backstory on the little app that couldn’t. Creepmode LLC originally submitted their app as “Pocket Spy” with features worthy of a spy: motion detection activated photo taking, sequential quick-shutter photos, audio-sensor stealth audio recording, decoy screens, and a password protected Vault. Sadly, they were rejected because Apple was alarmed at the idea of a spy app. So after some app modifications and resubmissions, Creepmode LLC decided to rename their app Pocket’s Pie (Get it? Pocket Spie?) and the app passed Apple approval. 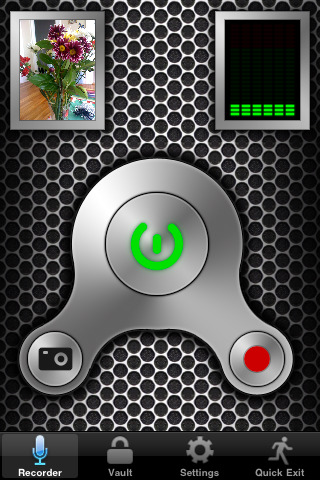 Bogus name aside, Pocket’s Pie comes with a lot of functionality. It is equipped with a voice memo recorder that is easy to use: simply tap on/off. You can also take several spy-worthy, automatic sequential photos with their motion detection camera. Just tap anywhere on the screen to take candid shots. The shutter is also completely silent unlike the iPhone’s default camera. This creeps me out just a little bit, and makes me think back to my days spent traveling in Japan where I discovered shutter sounds were in place for a reason. Panty shot, anyone? You’ll even be able to password protect your audio snippets and candid shots in the Vault.

Pocket’s Pie does what the iPhone’s default Camera and Voice Memos apps do, only better. It allows you to be super sneaky or super creepy rather. And I’m sure you can guess owners use it for less than pure purposes. Taking pictures of birdies, catching a boss who sexually harasses you, or trying to hunt down ghosts with this app in hand is entirely possible but I’m sure you can imagine for yourself what this app could be used for in the wrong hands. The noise sensor, motion sensor, sequential photo capability, and password protected vault just spell trouble to me. There are also four different display screens to create a little privacy from your onlookers if you don’t want to share pictures of your nawtie bird photos. There’s even an autosave feature if you have to exit out of the app so you can rest assured your precious photos and audio snippets will be saved. The app even has a blank looking screen you can activate with the press of a button. The screen is black with white text that are instructions for how you can take photos, record, stop recording, or exit.

Honestly, I’m a little afraid of what an improved version of this app could be used for in the wrong hands. As is, the app does not have an export feature (i.e. integration with e-mail, Twitter, Facebook, etc.), video capturing capability, landscape capture, full screen image zoom, or export capability. It’s also not easy to browse through photos because you’ll have to select each one individually from your vault. Hopefully it stays that way, and Apple developers are sound in mind to keep this app away from causing more trouble.

Yes, there’s an app for “that” if you need one. Creepmode LLC’s Pocket’s Pie will run you $3.99. I just ask that you please exercise some caution and restraint if you choose to buy. Maybe use it to capture shots of actual kitties?