Playing 100 Rogues is a lot like running into a smokin’ hot cosplayer at a con. At first, you’re just taken in by how attractive they are, the inherent sexiness enhanced by the awkward nerd herd clustered around them. Then you notice the costume. After examining the elaborate details and obsessive desire for authenticity, you realize that underneath that tasty exterior lies a true geek.

Without a doubt, 100 Rogues has done a huge service to roguelikes by being both fun, attractive, and surprisingly cool. Okay, maybe not “cool” cool, but at least not as embarrassing as ASCII dungeons. A fantasy-themed dungeon crawler, like Sword of Fargoal or Nethack, 100 Rogues plunks you down into dungeons filled to the brim with monsters to vanquish and treasure to loot. Death is almost certain, but dungeons and monsters are randomly generated, so the game is different every time.

Unlike RPGs, like Zenonia, there’s precious little story or character to be had here, although the opening cutscenes are surprisingly informative, and you’re given a clear goal: kill Satan. Murdering the Lord of Darkness aside, the main emphasis is on leveling, developing your skills, and equipping the best gear. You start off with the option of playing as a Human Crusader or a Fairy Wizard. They both have their own strengths and weaknesses, and choosing the best one really depends on what your playing style is like.

Action is turn-based, so nothing moves unless you do, and the touch controls are really beautifully implemented. There is no clumsy D-pad hogging the screen, and most everything just requires a simple tap or two, and an easy to access inventory and stable of awesome skills rounds out combat.

It’s worth mentioning that skills also look fantastic, with one of my favorites resulting in a Monty Python-esque Hand of God coming down from the sky. The whole game is actually stunningly attractive and the retro music and distinctive monster designs smother 100 Rogues with sweet, sweet eye and ear candy. 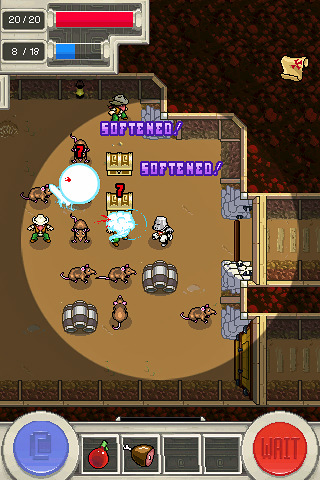 Speaking of candy, while there are monsters aplenty to thwart your quest, you also have to keep an eye on a hunger gauge that slowly ticks away as you progress. The need for fresh food actually becomes a seriously important secondary concern, because nobody wants to starve to death instead of going out in an epic battle.

All in all, 100 Rogues is a really balanced, but challenging game. It’s definitely going to skew a little more in favor of hardcore gamers, but the gorgeous graphics and brilliant gameplay make this exceptionally appealing all around. If you’re looking for a very solid roguelike or just want to inject a little sword and sorcery into your life, 100 Rogues is definitely one of the most fun, engaging, and replayable turn-based games out there.

One final caveat, there have been several reports of the game crashing. The developers have been rapidly updating as they receive feedback, and I didn’t encounter any problems myself, but it does appear there are multiple technical issues that need to addressed before 100 Rogues can truly ascend to the height of awesome.