If you’re a casual gamer who prefers cute stories and characters, do yourself a favor and skip this one. Archetype is rough, tough, and built for hardcore fraggers in need of serious pwnage in their apps. Unless you’ve already gotten several head shots under your belt and know how to properly strafe, you shouldn’t be anywhere near this game.

I know, I know, “hardcore” and “apps” don’t usually mesh well, but Archetype puts forth a serious effort to cater to the Halo/Call of Duty set, and it mostly succeeds. From the very start, the visuals sizzle in the hyper-realistic style of modern FPSes, and the intense death match style throws you right into the action. It ain’t Master Chief level, but it ain’t that far off neither.

Don’t come in expecting much story beyond “I’m a galactic killing machine with big guns! Pew pew!” because it’s entirely irrelevant. There’s an obnoxious video with a minimal amount of backstory that plays at startup every single freakin’ time, but what you’re really here for is the death match. At least, I hope that’s what you’re here for, because there really isn’t anything else to do.

Got a network connection? Good, then you have multiplayer access. That means up to 5 on 5 matches with five different levels to choose from and a whole lot of shooting. The controls are a simple dual stick setup: the left stick moves you around while the right one aims. If you can get a team together (which can be challenging), the game is really quite fun as you stalk through the levels, mowing down enemies in a hail of bullets. 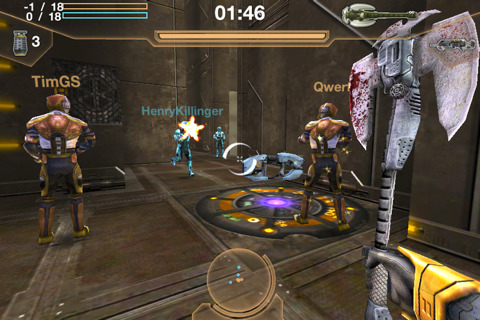 Although the visuals are quite stunning, the overall design is fairly generic, and while the controls are highly intuitive, combat isn’t quite as satisfying as it could be. There are no varying goals to chase, and the levels become highly repetitive after awhile. Your health meter drains all too quickly, and respawn points are frequently placed in spots that just get you immediately killed again, which is frustrating, to say the least.

In general, I was impressed by how smoothly the game runs, but in many ways, it felt like a demo version of more successful console shooters, instead of a fully functional game in its own right. Archetype looks and handles great, but it suffers from an overall lack of content that limits the addictive replayability that is so vital for an FPS.

To be fair, it’s still a very worthwhile and affordable little game. The relatively short play time per level, about 4 or 5 minutes, makes this a great way to get in a few kills on the go, but adding in additional objectives or playing modes, like capture the flag, would bring a lot more to this very attractive, but unfortunately light on content game.