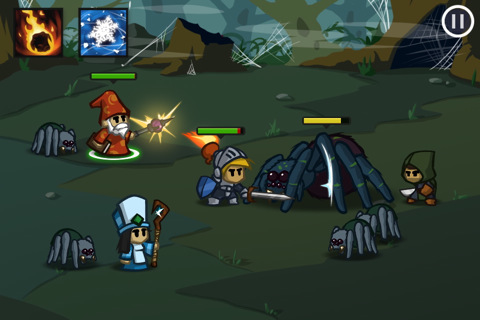 The gameplay for Battleheart is fun and exciting for the most part. You select up to four classes to bring with you. Then you select a map and a level to beat. The battlefield does not move and enemies appear from the left or right or they can spawn in the middle of the field. In battle, you will tap on a character and slide your finger to a location to move. If there is an enemy, slide your finger from the selected character to the target and that character will fight it. When a unit is selected, you can see his or her health and available skills. These skills will help defeat enemies or turn things around. When a skill is used, you will have to wait a certain amount of time before you can use it again. The controls are good but sometimes if you have two or more units together, you might select the wrong one. To avoid such a situation just try not to clump your team together. Battleheart has no online play or a leadersboard. That is alright since the game is fun enough on its own.

The graphics in Battleheart remind me of flash games or something from Newgrounds but more polished. The characters are cute but have no nose or mouth. When you equip a character with a weapon it will appear on him or her in battle. Sometimes there is some lag if too many things are happening on the field. Compared to what it used to do this is okay. Overall the visuals are good but nothing spectacular. 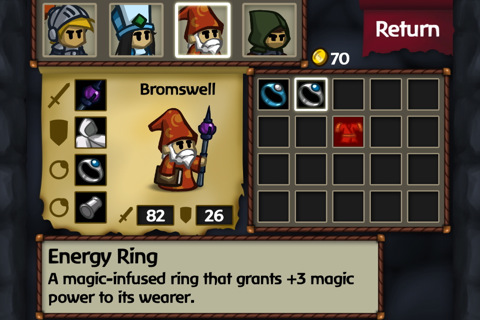 Battleheart’s audio makes me feel like if I am in battle in a fantasy world. When a character who fights with a sword attacks an enemy with a axe, the sound effect is what I imagine it would be. The soundtrack is good but nothing special. Sometimes it feels calming and sometimes it feels like I am in danger. It also feels repetitive. The soundtrack and sound effects are decent but nothing out of the ordinary.

The price for Battleheart is $2.99 in the iTunes App Store. I think this is a fair price for the game. Mika Mobile has a pretty good support team for Battleheart. They usually fix a bug, crash, or whatever within a week or two. Reportedly they are also releasing a new class sooner or later. Replay value for Battleheart is getting better gear and leveling up your characters. The arena in each map fills in both these roles. The last arena is quite tough but it offers the best rewards. I hope future updates will include new maps, enemies, classes, and equipment. I recommend Battleheart for people who like real time strategy games and want a reliable company that supports it.