Jailbreaking an iDevice brings it so much more functionality than was initially possible with the base iOS interface. After jailbreaking the Apple product, the user has instant access to a whole new app store, Cydia, filled with amazing apps and tweaks that can greatly control how the device operates and looks. A prime example of a fantastic mod or hack for the iPhone or iPod Touch is called MyStrings and it has the capability of changing various lines of text through the GUI of iOS. For example, if you wanted to change the “Slide to Unlock” text on the lock screen, you could customize it to whatever you wanted. Note: Remember that this app requires that the user jailbreak their iDevice to access it.

When first downloading the iPhone app, MyStrings, you’ll notice that the mod doesn’t come with any sort of icon or launch from the home screen. MyStrings’s settings are completely accessible through the iDevice’s settings in the phone. However, once opening these settings up, anybody would be amazed at the amount of text that can be tweaked from MyStrings. 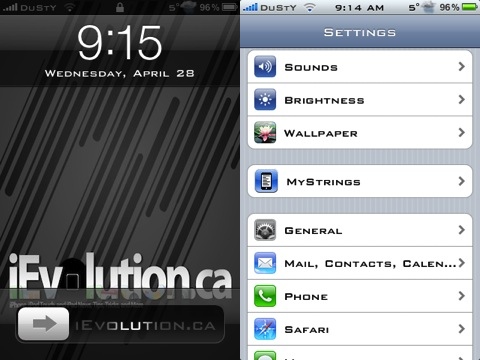 There are several categories up for customization such as application text (Facebook and Twitter can be customized), warnings, pop ups, lock screen text, and so on. However, the customization doesn’t stop here. The user has so much control over various lines of text in the GUI of iOS that he/she can specify a fake time stamp on the phone. The carrier label is also up for changes as it can be customized to say whatever you’d like it to.

Below the different categories of strings of text you can change is a category called “Extras” that contains all types of goodies for customization on your iPhone, iPad or iPod Touch. From the “Extras” area, you can make even more changes such as changing the wifi, time or battery signal to numerical, or even changing the color of your docked or undocked icons on your home screen! 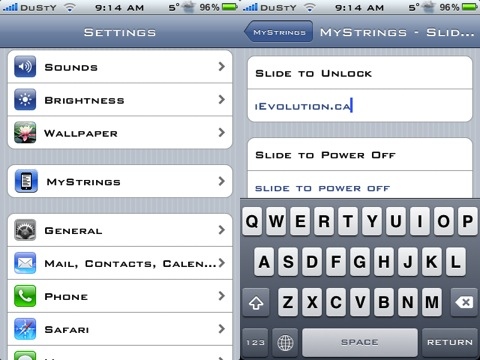 One of the main issues with version 2.0.4-2-1 is that a few of the features within MyStrings won’t work due to compatibility issues with iOS 5. For example, the feature that allows the changing of the status bar time color is useless. Some users might also find it annoying that a respring is required after each edit in the settings of MyStrings. This shouldn’t be a problem though if you make all changes in one go rather than changing one at a time.

Overall, MyStrings is a solid tweak that allows major customization over the interface of the iPhone. It’s easy to use, and the amount of strings that you’re able to customize is huge. Any hardcore jailbreaker will want to get their hands on this tweak for less than $2.

Note: Changes to the strings you make are shown after a re-spring is done. There is a similar app called MakeItMine in Cydia but MyStrings is much more effective and feature filled.